In the itty-bitty mall that builds on the recently opened library of the Vickery Park branch, you can shop for groceries and other sundries in the Burmese, Ethiopian and Mexican markets. It’s three continents in about 45 feet.

Vickery Meadow, as this spice-scented empire attests, has become the heart of life for immigrants and refugees in Dallas. It’s a dense and diverse neighborhood, although its architecture, for the most part nondescript apartment complexes in various stages of decline, does little to reflect the character of the people.

This unfortunate condition receives a welcome aesthetic boost with the addition of the $ 6 million Vickery Park Library, which turns empty land into what, as the pandemic abates, is expected to become a cultural and educational hub. dynamic.

“There are 56 languages ​​spoken in the community, and I can’t even name 56 languages,” says project architect Robert Meckfessel, founding director of Oak Cliff-based DSGN Associates. This linguistic diversity is literally incorporated into the building: the word “welcome” is engraved in the stained glass windows at the entrance in Amharic, Arabic, Burmese, Chin, English, French, Nepalese, Spanish, Swahili and Tigrinya.

The main body of the library takes the shape of an ellipse, its curved shapes, according to Meckfessel, responding to common traffic patterns through the site, which connects the converging streets of Park Lane and Ridgecrest Road. During the holidays, the empty lot now occupied by the library had been used for the popular annual community festival of light. To maintain this tradition, a large lace bark elm was imported from Arkansas – yet another immigrant to the neighborhood – and was planted in a landscaped area across from the library, to serve as the centerpiece of the event. .

This area also includes a children’s play area with a climbing structure, equipment requested by community members during public planning sessions for the building. Children are a priority for the library, which is located directly across from DISD’s Sam Tasby Middle and Jack Lowe Elementary Schools.

There’s also more parking than needed – 36 spaces, as the city code requires – even though it’s along a bus route and in an area where not everyone drives. The landscape design is based in Dallas Exterior studio.

The clean lines and cool material palette of the one-story building betray Meckfessel’s modernist sensibility. He is a longtime advocate for the preservation of mid-century architecture, both in Dallas and nationally. The original design of the building was right in that idiom: “It started out as a glass box, but we needed more shelf space.” Hence the gray brick. A large overhanging canopy wraps around the exterior, providing shelter from the elements along the edge of the building, while keeping the sun at bay.

The installation aims for a high level of sustainability. It is designed to be 100% carbon neutral, with photovoltaic solar panels on the roof providing 33% of its power. A corner of the landscaped site, along Park Lane, is dedicated to a stormwater retention pond.

In modern tradition, the 18,000 square foot facility is open, offering librarians what Meckfessel calls “ultimate flexibility.” Utilities are performed under a raised floor, with a comfortable rubberized surface specified by library staff. It’s a bright space, lit by large windows that break through the brick facade, and a line of slatted windows above.

Three drum-shaped pods (respectively in red, blue, and green) of varying sizes float in the interior space, providing enclosed spaces for lessons (English as a second language is popular) and other meetings. The larger of the pods is subdivided into quirky quarters for small groups.

There’s some clever detail work, too: The stacks of books have powder-coated metal end caps, essentially dry-erase whiteboards so librarians can easily reclassify a shelf if needed. In the large children’s area there are flower boxes in bright red for comfortable, sequestered reading.

A rectangular structure made up of tilting concrete panels is clipped to the rear of the elliptical library building; inside is a 90-seat meeting room, flexible storage and office space, the latter being intentionally restricted to encourage staff to stay on the library floor.

The most spectacular feature of the library is the exposed steel traction system that supports its metal roof terrace. To keep the central area of ​​the library column-free, Meckfessel and structural engineer Tom Taylor, from Datum engineers, created a three-dimensional truss system, with a network of steel cables crossing the width of the 80-foot span. “Tom doesn’t like to make things easy,” says Meckfessel of Taylor, a revered figure in the Dallas architectural community.

Cables meet on overhead poles, white steel cylinders with the clean lines that were Taylor’s pride.

The system was initially not intended for display, but that changed when Meckfessel saw it being installed during construction. “We weren’t making any effort to make it architecturally appealing because the concept was that it would be covered with drywall,” says Taylor. “But I have an innate opinion that if you find a really nice system for solving structural problems, then it’s automatically architecturally nice.”

This is definitely the case here, and it is particularly appropriate in a library, a space dedicated to opening our eyes to things we might not ordinarily see. By the way, giving the unseen a dignified presence seems just the right metaphor for a library in Vickery Meadow, an often overlooked community worthy of attention.

Its features now include a new refined work of modern design. 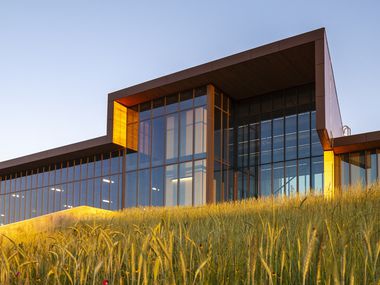 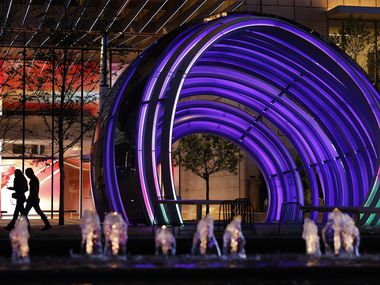 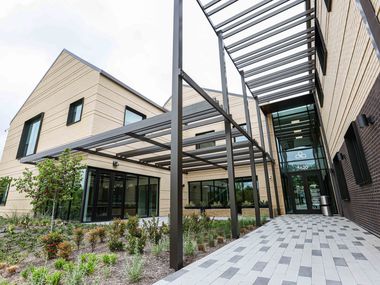